What Was the First Handheld Game Console?

For many of us who grew up with Game Boys, we are still incredibly nostalgic when we remember those adorable and infinitely fun handheld game consoles. Sure, nowadays we have the 3DS, Vita, and other powerful handhelds that can take our gaming experience into completely new realms, but it’s undoubtedly true that Game Boys were the real thing!

Many of us remember the joy of inserting new batteries into our tiny grey pals, blowing on the cartridges, and watching that red LED power indicator light up! But how did it all begin?

Handhelds are generally categorized as portable gaming devices which are much smaller than home consoles.

As their name says, they are intended to be held in one’s hand. Hundreds of handhelds have been released over the years. And, consoles like the Game Boy were the favorite of kids and adults all over the world! Generally, all the controls, audio speakers, game slots, and screens are found in the same unit. Back in the past, handhelds had only the basic features like one or two buttons, a black and white screen, and basic sounds. Today, handheld consoles have touch screens, wi-fi, 3D options, extended battery life, HD graphics, and can run more complex games.

Back in the mid-1970s, the world entered into the golden age of arcade games and manufacturers were competing to make the greatest games ever! Titles like Space Invaders and Pac-Man became an integral aspect of popular culture, and they are still regarded as some of the best games ever. However, even though arcades were massively popular in the States, people wanted to take their gaming experience on the road. They needed something smaller and more compact. And, in as early as 1976, the first handheld game was produced by Mattel!

The Race is On!

Mattel created Auto Race — it was a completely digital handheld game, but it was a far cry compared to the advanced features of the Game Boy. It featured two colors — red and black — with a small scrolling screen and a two-way joystick that allowed you to control the tiny red blip that resembled a car. Additionally, there was a slider which allowed you to shift gears. 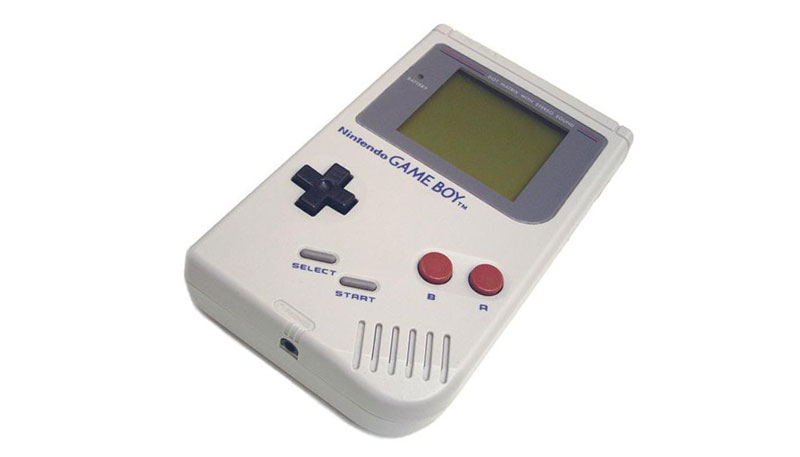 After that, many other companies, like Coleco, created single-game handhelds. However, the key event was the invention of a handheld by Milton Bradley, which featured interchangeable cartridges. Released in 1979, the Microvision was a bulky and basic console, but it allowed gamers to swap out ROM cartridges which contained simple games like Baseball, Pinball, Bowling, a Breakout replica, and a Star Trek-themed game.

Early handhelds were actually partly inspired by LCD calculators. It all came together when Gunpei Yokoi observed a businessman who was pressing random buttons on a calculator to kill time during a train trip. The sight inspired him to create a watch that could allow people to play games as well as tell time. And, in 1980, the Game & Watch consoles were born! Nintendo produced them for just one year. However, the watch idea was scrapped, and the result was a tiny, rectangular console. It was one of Nintendo’s breakout products, and it helped them get major success, selling over 43 million consoles around the world.

The Game & Watch consoles contained a small LCD screen, a tiny ROM, and a CPU processor that was only 4-bit. While that may not seem impressive, they were able to contain the best Nintendo games like Mario Bros and Donkey Kong! The units even had an early version of the classic D-pad.

After a few years of tinkering and thinking of design improvements for the Game & Watch, Gunpei Yokoi managed to merge the features of the old units with the system of the NES console. And so, the Game Boy was born!

It actually took a while before the most iconic handheld was released. It went on the market in 1989 and featured a dot-matrix screen, D-pad, A/B buttons, select button, and a start button. There was a rather loud speaker, and the games were loaded through cartridges. The unit had an 8-bit processor. And, the games people remember the most are Super Mario Land and Tetris — as they were sold as a bundle with the unit.

In technical terms, the first Game Boy was inferior compared to some of the other competing consoles, some of which were even 16-bit at the time. Some of the most popular handheld consoles that competed with the Game Boy in the late 1980s and early ’90s were:

Nevertheless, the Game Boy was the console which became a legendary cultural icon. It marked an entire era, and even though other consoles were technically superior, our little grey pal offered the classic Nintendo games which are still regarded as some of the best today.

Then, in the mid to late 1990s, handhelds were primarily inspired by PDA devices. Nintendo and other manufacturers competed to improve their consoles. With consoles like the Game Boy Color and the Neo Geo Pocket Color, the battery life was extended, and the games were finally displayed in color.

Handheld consoles experienced many further improvements in the 2000s with the release of the Game Boy Advance 2001, Game Boy Micro, Game Park 32 and even the Nokia N-Gage. Interestingly, if you remember the N-Gage, you know that it was a cellphone which allowed you to play MP3s and insert different game cartridges. It was one of the earliest mobile phones that featured high-quality games. After a few years, handheld consoles evolved even further with the Game Boy Advance SP, Nintendo DS, and the PlayStation Portable. These two consoles bought handhelds into the modern era and offered state-of-the-art graphics, touchscreens, internet connectivity, and highly advanced games.

Later, at the beginning of the 2010s, handheld consoles became fairly obsolete due to smartphones and their gaming capabilities.

Nevertheless, the previously mentioned PS Vita and Nintendo 3DS are the most popular handheld consoles today. The 3DS offers a unique 3D effect that doesn’t require you to wear special glasses. Plus, it includes dual screens and a browser which lets you surf the web. The console also has various applications similar to those available on smartphones. On the other hand, the PS Vita was released with 3G, a 4 core processor, a multi-touch screen, and many other high-tech features.

As you have seen, the story of handheld game devices is incredibly interesting! The first handheld video game console was incredibly primitive, but it started an avalanche of different gadgets. Today, the consoles are not as popular due to smartphones, but the available consoles definitely create a high-end experience. Even though the first console was Auto Race, the best of the early consoles was definitely the Game Boy! It will forever be remembered and loved by millions of fans all over the world! So dig up an old handheld console or try an online emulation and smash those buttons!

10 of the Best Handheld Games for Kids →